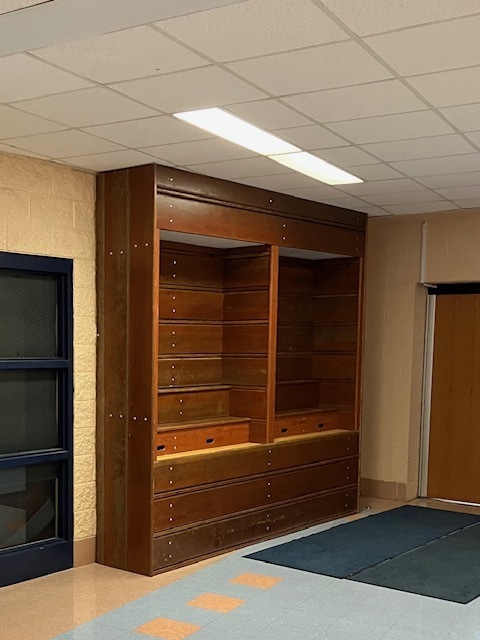 The new trophy case is constructed of wood taken from the old Newbury High School gym bleachers. In fact, the case is designed to look like bleachers being pulled out for seating, an obvious reference to the source of the wood itself. The designers and builders of the trophy case were John Cowles, Lester Byler, and Bob Battisti. According to Dr. Rich Markwardt, West Geauga Superintendent, "The trophy case is a great way to showcase some of the major wins of the Newbury Black Knights. The fact that it reflects the old gym bleachers adds a unique sentimental element. When I asked Mark Richardson, our Facilities manager, to have it built, I didn't know quite what form it would take. It exceeded my expectations." The trophy case is located in the high school gym lobby.

West Geauga has a huge store of Newbury memorabilia. Some will eventually find its way to displays such as this one, perhaps on a rotational basis. Others, highlighting accomplishments in academics, athletics, and the arts, will be on display in a video format.